Can and Should Biotechnologists Bring Back the Woolly Mammoth?

In the film _Jurassic Park_, scientists use fictional biotechnology methods to re-introduce dinosaurs to the earth. According to the plot line, intact dinosaur DNA was found in the fossilized remains of mosquitos. The fictional scientists were able to re-introduce that DNA using cellular and genetic materials from close evolutionary relatives of the dinosaurs.

Is the prospect that we might re-introduce extinct species in this way merely fiction? Perhaps not, especially for the woolly mammoth, which went extinct much more recently than the dinosaurs. There is evidence that the last mammoths died only about 3,000 years ago. Mammoth remains have been found intact and fairly well preserved in several different sites around the world. The most famous and best preserved specimen, a baby mammoth, subsequently named Lyuba, was discovered in 2007 in the Yamal Peninsula of Russia. Lyuba was so fully- intact that scientists were able to identify samples of mammoth milk in her stomach. 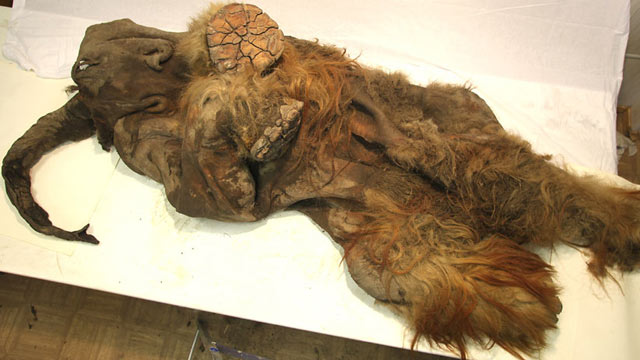 Could the mammoth genome be reconstructed using materials from Lyuba and others? DNA usually does not survive intact over millennia. But in other challenging cases DNA has successfully been reconstructed. Neanderthals (who, incidentally, were mammoth hunters) may have gone extinct 30,000 years ago, but the Neanderthal genome was [successfully sequenced in 2014](http://www.nature.com/nature/journal/v505/n7481/full/nature12886.html). Perhaps it is not unreasonable to infer that we might eventually be able to reconstruct the genome of other species. Already the project is underway ­– scientists are working to identify and sequence regions on the mammoth genome. Using the genome of modern elephants as a template, they have already identified many mammoth genome segments, and have begun to use them to generate a picture of the full genome.

About a year ago, in March of 2015, scientists [announced](http://www.livescience.com/50275-bringing-back-woolly-mammoth-dna.html) that they had successfully inserted woolly mammoth DNA into elephant cells. One might reasonably wonder why anyone would undertake such a thing. For a number of years, there have been several different groups of scientists working to isolate and sequence the full mammoth genome. Some hope that mammoth DNA might be inserted into a denucleated elephant ovum, to produce a cloned mammoth. Others hope to reconstruct mammoth DNA using gene editing and splicing technologies. Members of yet another group hope to use selective breeding to re-introduce mammoth traits in the elephant genome. If any of these efforts is successful, woolly mammoths may once again roam the land. The goal is to reintroduce a species that is not only extinct, but one that has been extinct for thousands of years. Maybe scientists will eventually be able to do this. But should they? What ethical issues are relevant for scientists who are considering whether or not to undertake this project?

One issue is biodiversity. Globally, biodiversity is declining fast, due to human-caused extinction of many different species. Some hope that we may be able to reintroduce species as their numbers dwindle. For some species, however, it is already too late; they are already extinct. Is it reasonable to hope that we might reintroduce extinct species, using biotechnological means? Others posit that reintroduction of the mammoth might enable us to fill an environmental niche that was left empty when mammoths became extinct.   Thus the group _Revive and Restore,_ which aims at “genetic rescue for endangered and extinct species,” states that “the ultimate goal of woolly mammoth revival is to produce new mammoths that are capable of repopulating the vast tracts of tundra and boreal forest in Eurasia and North America.”

While such efforts are underway, there may be reason to doubt that this will be an effective way to reduce biodiversity loss, with so many species falling extinct every day. Reintroduction of the mammoth would not make much of a dent in present extinction rates. Further, it would be unfortunate if efforts at “genetic rescue” for long-extinct organisms were to take our attention away from conservation efforts that aim to preserve habitat and to protect the remaining members of presently endangered species.

On the other hand, the effort to recover the mammoth would be a tremendous technological and scientific breakthrough. The consequences of such a breakthrough are difficult to predict, but they might be tremendous, and might include follow-on applications with significant impact on many different areas of scientific development. Are efforts to recover the mammoth justified if they may facilitate valuable technological development?

Teachers in the Iowa State University summer Bioethics workshop have produced a case study constructed around the question “[Should we bring back the Woolly Mammoth?”](http://www.public.iastate.edu/~jwcwolf/CaseStudies/2016%20Mammoth.pdf) The case study is classroom ready, and can be downloaded [here](http://www.public.iastate.edu/~jwcwolf/CaseStudies/2016%20Mammoth.pdf). To run this case study, teachers divide the class into four different _interest groups,_ each of which includes members who are either _for_ or _against_ the use of biotech methods to reintroduce the woolly mammoth_._ Students assigned to each interest group are instructed to read materials associated with their group, and then to confer to produce arguments that support the position. Students are then given time to argue for their group’s position, and to pose questions and challenges to representatives from other groups. The case is designed to be fun, while also introducing students to some of the technical details of the science involved in reconstruction of ancient DNA, somatic cell nuclear transfer cloning methods, and the possibility that mammoths or other extinct animals might be genetically reconstructed and reintroduced.