“Prior to 1960, smallpox ranked with malaria and tuberculosis as the main causes of death due to infectious disease. In 1967, there were around 10–15 million cases of smallpox in the world each year, a figure which had dropped from around 50 million cases a year in the 1950s. One group of experts has estimated the global death toll from smallpox during the 20th century to have been around 300 million.”

The scourge of smallpox is no more. At present, only two known samples of the smallpox virus remain, stored in high-security biocontainment laboratories.

Can we hope to repeat this success with other infectious diseases? The World Health Organization reports that the number of annual malaria deaths was 839,000 in 2000 and fell to about 438,000 in 2015. While this is a decline of 48%, it still indicates a rate of about 1,200 deaths every day. Malaria is not a virus, but a parasite. The lifecycle of the microorganism that causes malaria involves a symbiotic relationship with Anopheles gambiae—an African mosquito. Infected mosquitoes inject the malaria parasite when they bite. The disease malaria is a side effect as the parasite protozoans move through the next stage in their life cycle, in a human or other mammalian host. Researchers have discovered that the best way to target malaria may not be to go after the microorganism that causes it. Instead, they have targeted its vector: the mosquito.

The most common manners in which to target the mosquito are familiar. Nets, spray repellant, and insecticides are used worldwide to keep mosquitoes away and to reduce population density.   But more recently, genetically-modified mosquitoes have been developed, which could potentially be used to reduce mosquito populations. A British company named Oxitec has developed a mosquito—a variant on a species called Aedes aegypti, the mosquito that carries the Zika virus. Oxitec’s GM mosquito, called OX513A, is a sterile male, modified so that when a male OX513A mates with a wild female, the resultant eggs will not be viable. They will never hatch. Oxitec has sought approval to release thousands of male OX513A mosquitoes in Florida, as a way to combat the spread of the Zika virus.

The Next Generation of GM Mosquitoes: CRISPR-Cas9 Gene Drives 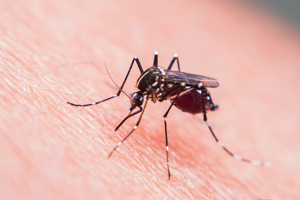 Newer innovations may be even more effective than Oxitec’s GM mosquito. The development of CRISPR-Cas9, a new, efficient tool for gene editing, has made it easier, quicker, and cheaper to develop biotech drugs, animals, and plants. CRISPR is a tool made of engineered DNA, containing a guide sequence, a snip of genes to be spliced into the target, along with a gene for the Cas9 enzyme. The Cas9 enzyme can cut a wild-type strand of DNA at a pre-selected location. As the cell moves to repair the cut strand of DNA, it replaces it with DNA that matches the selected DNA. It inserts a pre-selected gene sequence precisely where researchers want to put it.

Because the CRISPR-Cas9 tool is made of DNA, it is possible to use CRISPR to insert itself into the target organism. When this is done, it creates what Jennifer Kahn has dubbed a “perpetual-motion machine for gene editing:” whenever the cells divide, the CRISPR-Cas9 tool is spliced into each genome, and brings with it whatever genetic sequence researchers select. In this way, a genetic sequence can be inserted into every wild-type DNA sequence with which it is paired. This mechanism is called a “gene drive,” because it can be used to drive a selected genetic sequence into a population so that, eventually, if the genes function as expected, every descendent organism will possess the phenotypic trait associated with the selected sequence.

In ordinary circumstances, the possession of a disadvantageous gene would undermine the reproductive fitness of those organisms that possess it. But when the genetic precursors for disadvantageous traits are built into a gene drive, there is no opportunity for them to be selected out. For prolific species that quickly grow to reproductive age, it might not take long at all for gene drive technology to spread to every member of the species. In the case of mosquitoes, researchers estimate that it might be possible to drive a trait through the entire global population of a mosquito species in the course of a single year. For less-prolific slower reproducing species, it might take centuries to accomplish the same goal.

What Use is a Gene Drive?

Why would we want to alter every member of a wild-type species? Researchers have projected that gene drive technology might be used to destroy or weaken insect pest species, or to reverse genetic resistance to pesticides. The goal might not be to eliminate or extirpate the target species, but only to suppress its numbers or to make it easier to control.

But researchers have also proposed that this new technology might be used to drive some especially dangerous species to extinction. It might be used, for example, to wipe out local populations of harmful invasive species like Zebra mussels or Asian Carp, or Kudzu. Research is already underway to develop a gene drive that would eliminate those varieties of Anopheles gambiae and Aedes aegypti that spread Malaria, Zika, and other diseases.

The Ethics of Extirpation and Planned Extinction

The ability to extirpate an entire species brings an awesome responsibility. The scientific community has recognized that gene drives present new ethical challenges: the National Academy of Sciences recently released a 217-page treatise on the control of gene drive technology. The World Health Organization developed a similar publication addressing ethical issues raised by genetically modified mosquitoes. We live in an age of rapidly-diminishing biodiversity, and efforts are generally underway to reduce the rate of biodiversity loss. While we do not fully understand the ecological role of different species, there is good reason to believe that many species, including the lowly mosquito, provide important ecosystem services. While mosquitoes prey on us, bats and birds prey on them, and some may depend for their existence on mosquitoes. The extirpation of a species may have unanticipated effects.

But to say that there may be unanticipated effects is not to say that we have no information that could help us to understand the ecological and environmental consequences of species extirpation. By some estimates, there are as many as 3,500 different mosquito species, of which 30 spread malaria. Perhaps neighboring species would fill in the niche if the malaria-carrying varieties were targeted for gene-driven extirpation.

Are there ways to guard against potentially catastrophic and unexpected environmental effects? Some have proposed that researchers who develop genetically-modified species that might wipe out wild-stock populations should simultaneously develop a reverse gene drive that would remove the original drive from the population, and restore the target population. Such a ‘reversal drive,’ or ‘immunization drive’ might be difficult to create, but there is no reason in principle why it should be impossible. At this point, however, reversal drives are very much in the development stage.

Initial implementation of a gene drive might be attempted in an environment where the altered organisms are unlikely to survive in the wild. But in the case of mosquitoes, containment might be difficult once gene drive altered insects have been released.

Since the effects of gene drive implementation might eventually be global, it is important to note that the benefits and risks associated with implementation will eventually be borne by people who had no input into the decision to use this new technology. Do we have the right to impose these consequences on people who have not been given the right to make their interests known? The problem cannot be easily solved by increasing democratic representation in environmental decision making, since some of those whose lives would be changed by this technology are future generations who are not here to vote.

The intentional eradication of a species is an awesome prospect, but not entirely a new one. The remaining samples of the smallpox virus still exist, held in tenuous trust for future generations. Ethicists and researchers have often discussed whether we should destroy them, to guard future generations against the possibility that the virus might somehow escape. It would be more complicated to do the same thing for mosquito species – to maintain a breeding stock of species we target for elimination. If the elimination of the species was successful, resulting in the elimination of the disease, it is difficult to imagine what might justify a re-release. (If the experiment seemed to be resulting in an ecosystem collapse, a release might be called for.) But even if the targeted mosquitoes were never re-released, it might partly mitigate reservations about the implementation of gene drives if we preserve the ability to put things back as they were.